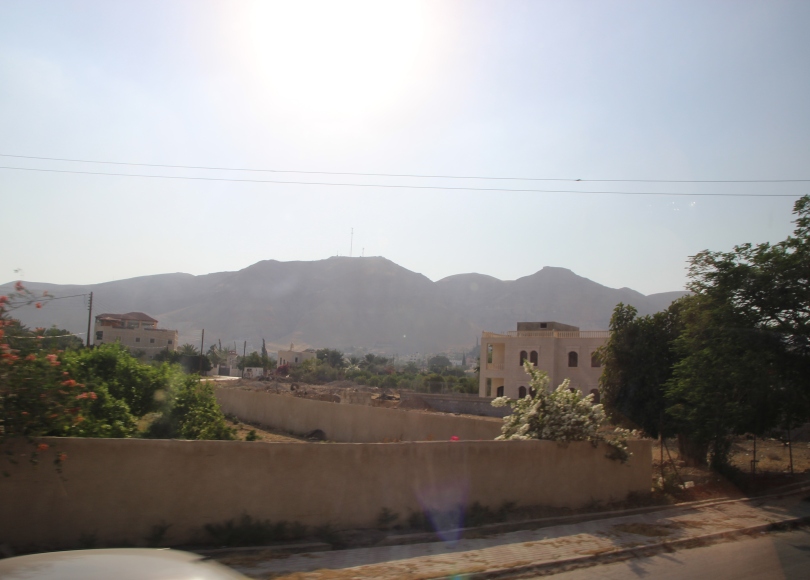 We had spent a day visiting Masada, Qumran and floating in the Dead Sea, and were now on our journey back to Jerusalem. On our way back, we drove through modern day Jericho which is about 25km North-East of Jerusalem.

There have been many theories and opinions about Jericho, and a lot of speculation around archaeological finds. We know the story of Jericho most likely from when we were small children. I remember Dad telling me the story of Joshua trusting God’s funny plan of marching around the city to capture it. I remember the facials, and the expressions he added to boost the story. I loved it! So there are the Israelites, marching 7 times around the city (once per day), then on the 7th day, marching 7 times, and on the last round, blowing trumpets and shouting God’s name. And we know from scripture that the walls did in fact come tumbling down like the children’s song says! The story is found in Joshua 6:1-27, and is though to have happened around the end of the 15th C BC.

“Now the gates of Jericho were securely barred because of the Israelites. No one went out and no one came in. 2 Then the Lord said to Joshua, “See, I have delivered Jericho into your hands, along with its king and its fighting men.” (Joshua 6:1-2). I love the start of this story because it is an example of how God delivers us before the situation even plays out. God says to Joshua…”I have delivered…” There is power in knowing that God has already delivered you from your situation that you find yourself in. Is there something in your life that God is saying – ‘hey I have this all sorted already. You are already delivered from this, just walk the road with me through it and you will see.’

“So Joshua son of Nun called the priests and said to them, “Take up the ark of the covenant of the Lord and have seven priests carry trumpets in front of it.” 7 And he ordered the army, “Advance! March around the city, with an armed guard going ahead of the ark of the Lord.” …20 When the trumpets sounded, the army shouted, and at the sound of the trumpet, when the men gave a loud shout, the wall collapsed; so everyone charged straight in, and they took the city. “

The Israelites saved Rahab and her family (she had protected the spies that Joshua sent to the city), and then burned the city. The image below is a reconstruction of what the city might have looked like. I always thought it was a very large city, but some think the inner part of the city may have housed only 600 people. At the time of seige though, people may have rushed to Jericho and so it could well have been thousands. It’s interesting how there was 2 walls, with housing possibly in-between.

The image below is an aerial photo of the area that is believed to be old Jericho, from this website here. This is an interesting website as it tells of the archaeology journey, finding charred pots, fallen bricks, pottery (unique to the 15th C BC), and so forth.

We only drove through Jericho, and so my photos were limited to being taken through the window of the coach. Some of the images below show modern Jericho, the buildings, the date palms almost ready for harvest,

So what are some simple life applications from this story? Usually we go with ideas such as steadfast trust in God, and His plans. Or carrying through with God’s instructions. Or we could take the life application of patience. But the thought that stood out for me, was the idea of the wall, the fortification. Sometimes we build such big, strong walls. Sometimes our walls are to stop us from getting hurt, blocking out friends or family, or God. And what this story tells me, is no matter how big the walls are, God can get through them, he can conquer the things that hold us prisoner. I love the lyrics in the song “Reckless Love” by Cory Asbury, where is says “there’s no wall You won’t kick down, lie You won’t tear down, coming after me”. It speaks of a God who is tired of all the hardship, lies and walls that the devil makes us put up. God is coming after us, with a reckless love. We don’t even need to find the strength to run to Him, He will come to us!

Lord, we allow you to knock down the walls in our lives. Those things that prevent us for reaching out to others, or things that prevent others from getting close to us. Lord, we choose you, we invite you, to rebuild those areas of our lives that we have blocked you out from. Please forgive us, thank-you for your never ending, reckless love! AMEN