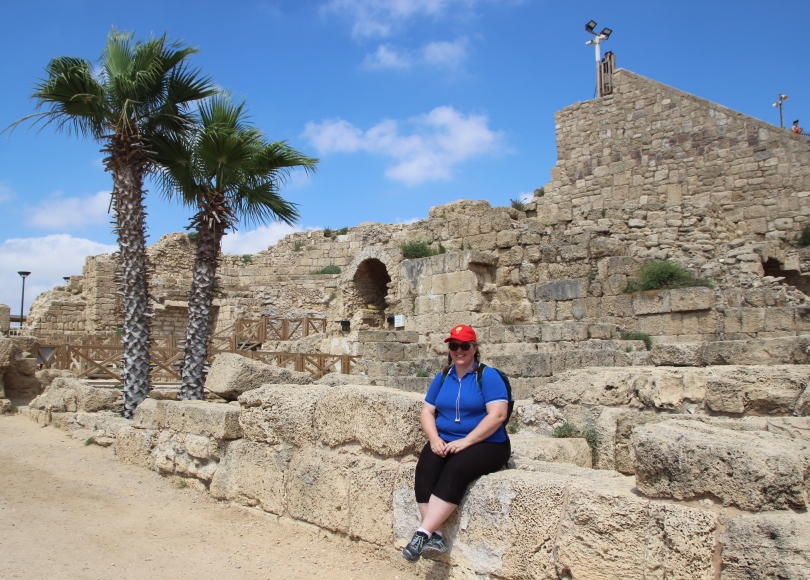 After Megiddo we travelled to the coast and saw a glimpse of the Mediterranean at Caesarea.  Caesarea was an ancient port, originally a settlement that Herod discovered, re-built and enlarged around 25-10 BC. It was named after Caesar Augustus. Caesarea had a purpose built harbour – probably the first of its kind to be constructed, and Hellenistic-Roman buildings. It would have been an important city for aiding Herod’s naval advances in favour of the Romans.

Caesarea has fabulous, extensive ruins, one of which is down by the water – Herods palace. You can still see the foundations down in the shallow water.

There is an amphitheatre, theatre and a Hippodrome where there would be horse and chariot races, and all sorts of games. Mosaics are visible, which would have made beautiful floors.

Pontius Pilate was at Caesarea, when he governed the area during the time of Jesus. It was here that Simon Peter converted Cornelius the Roman – who was the first non-Jew to believe in the Messiah, Jesus.

Acts 10
At Caesarea there was a man named Cornelius, a centurion in what was known as the Italian Regiment. 2 He and all his family were devout and God-fearing; he gave generously to those in need and prayed to God regularly.

Read the full account in Acts 10, of the sermon Simon Peter gave to Cornelius and everyone that gathered.

Phillip the deacon also lived at Caesarea and Paul was imprisoned for two years there. After Jesus’ time, during the 3rd century, Caesarea was a centre of Christian learning. In the 4th century, the site converted to Christianity and became a major centre of the Christian Roman Empire. (from https://www.jewishvirtuallibrary.org/vie-caesarea)

One interesting find at Caesarea, is a stone with the inscription of Pontius Pilate on it (the original stone is in the museum in Jerusalem). This dates back to Jesus’ time, and is just one piece of evidence that stacks together the Bible account of Jesus and his time here on earth. There was a lovely breeze at Caesarea, and overall it was a lovely stop.

As we drove out of Caesarea, there was a beautifully preserved aqueduct, which was the supplier of water to the town, from springs located about 16km to the northeast!

From Caesarea we drove through Tel Aviv, which I found interesting and reflective…to see a city that a decade or two ago, was in a state of unrest and war.  From Tel Aviv, we journeyed on to Jerusalem. It was a huge day of discovery for us, and we were looking forward to bringing in the Sabbath in Jerusalem, at the wailing wall.